The philosopher climbs out of his Athenian tub and enters the twentieth century, gets caught up in two world wars, strolls through the principal cities of capitalism and communism, reads up on the East-West conflict, listens to lectures on nuclear strategy, the theory of surplus value, and value-added tax, visits television stations, gets caught in the vacation traffic on the freeways, sits rolling his eyes in a Hegel seminar… Has Diogenes come to disrupt? It seems more likely that he himself is rather disturbed. He had taught: Be ready for anything, but what he now sees goes too far even for him. He had found even the Athenians to be pretty crazy, but what he finds in the present defies classification. Stalingrad, Auschwitz, Hiroshima— he longs to go back to the Persian Wars. Out of fear of psychiatric institutions, Diogenes refrains from going through the streets by day with a lantern. (Return of Diogenes, p.194, Critique of Cynical Reason by Peter Sloterdijk, Translation by Michael Eldred)

For many people for most of the time he is an impossible author. Many in academia and elsewhere do not consider Peter Sloterdijk as a serious thinker, let alone a philosopher; for them he is at best a gifted evocative contrarian. He certainly has a penchant for controversy and a tendency for use of extravagant language and extravagant use of language. In fact it is not an uncommon scene to see a German somewhat familiar with Sloterdijk’s thoughts on various matters, either through his writings or his numerous TV appearances both as a host and a guest or his feuilletons in Frankfurter Allgemeine Zeitung, certain impatience with his perceived imprecision and verbiage: “Sloterdijk - Nein, danke! Es ist nur Gelaber …”

Notwithstanding, for more than three decades he has been one of Germany’s most proliferate and most controversial philosophers. His work, a steady stream of ambitious philosophical books, has been emerging in English translations more and more over the past fifteen years all over the world. He is currently Professor of Philosophy and Aesthetics at the Karlsruhe School of Design.

What I have found interesting and unique in his thinking is his breaking away from dichotomies of others creation, and sparing the reader the immediate comfort of clinching to the usual black and white. He does this mainly through grand reflections at a much more larger scale of world history, hyperbolisch ideas and concepts, and eccentric neologisms such as his favourite “anthropotechnics”. His writings are too literary to be deemed philosophical and yet too philosophical to be regarded only as work of literature. His philosophical thinking is not within categories and that is perhaps one of the most common difficulties of others to locate his place in philosophical tradition. His language is as much spatial as temporal.

His bestselling Kritik der zynischen Vernunft1 (1983) is by far his most coherent and potent writing: it earned him the German public attention like of which only “public intellectuals” such as Habermas have mustered in European intellectual life. Since his rise to fame and the Habermas-Sloterdijk debacle, Sloterdijk has been ridiculed and has been labelled as “dangerous thinker”, “fascistoid”, “crypto-Nazi”, “an infantile attention-seeker”, and perhaps most derogatory of all “the Lady Gaga of philosophy”, a title for his allegedly most shocking bad taste.

Admittedly, my first impression of Sloterdijk came through others description of his philosophy. At the beginning, I found him unbearable. The constant stream of coded references to history of ideas makes him at times very difficult to understand, if not misunderstand. Also his polemical style and the worst of all, what seemed to me, his argumentation style through semantic lapses. Yet, I had a feeling that I could not entirely ignore him: it seemed he has something new to say, only if I could understand his coded words, and only if I knew Nietzche, Heidegger, Plato, St. Augustine, and Freud better. A year later I have come back to Sloterdijk after reading Heidegger’s Being and Time and Nietzche’s Thus Spoke Zarathustra. I admit that he makes more sense now.

The above description of Sloterdijk’s work is not meant to discourage you from reading him. In fact, the opposite is true. I am drawing attention to other’s criticism of him, whether justified or a result of shallow and sloppy thinking, not to tell you not to approach him, but how not to approach him. Once you know what his craft is you can find your way through him without being disappointed, disgruntled, or feeling cringed, disgusted, or angry. We live in an ever more increasingly confused and confusing global world and every-day phenomena we deal with already have complex structures of entanglement beyond the limits of our comprehension faculties and prediction powers. Clearly, instincts and general knowledge about things are not enough to navigate our way through the mess. The dependencies of our understanding and actions on objects, technologies, institutions, and ideas have made many theories of network and entanglement fashionable in philosophical discourse.

From the people on the left side of politics he is branded as a neocon, or sometimes as the establishment’s neoliberal thinker. However, conservatism stigma does not really stick on him.

It is clear that our older categories of knowledge and rough big-picture dichotomies are not explanatory any longer and we should break away from them. Philosophers like Sloterdijk tempt us to do so if there is any hope of survival left for our civilization. People like Sloterdijk, Bruno Latour, Bernard Stiegler, and some few others do not at all fit in Left/Right dichotomy.

Now, first of all, it is not too hard to discover that Sloterdijk is a student of what he calls kynicism (the antithesis to cynicism). According to him, one finds the origins of kynicism in the figure of Diogenes of Sinope, also known as “Socrates gone mad”. He clearly advocates the position of kynical combative philosophy in Critique of Cynical Reason:

Greek kynicism discovers the animal body in the human and its gestures as arguments; it develops a pantomimic materialism. Diogenes refutes the language of philosophers with that of the clown: “When Plato put forward the definition of the human as a featherless biped and was applauded for it, he tore the feathers from a rooster and brought it into Plato’s school saying, ‘That is Plato’s human’; as a result, the phrase was added: ‘with flattened nails’ “ (Diogenes Laertius, vol. VI, p. 40). That—and not Aristotelianism —is the real-philosophical antithesis to Socrates and Plato. Plato and Aristotle are both master-thinkers, even if a spark of Socrates’ plebeian street philosophy is still present in the Platonic ironies and dialectic mannerisms. Diogenes and his followers countered this with an essentially plebeian reflection. Only the theory of this cheekiness can open up access to a political history of combative reflections. This makes the history of philosophy possible as dialectical social history: It is the history of the embodiment and the splitting of consciousness.

In the aformentioned book, he identifies various distinctive aspects of kynicism. Coming after Diogenes, Sloterdijk finds kynical movements and messages in the figures such as Christ, Machiavelli, Freud, Faust, etc.

Diogenes and Jesus are united in their irony directed at social labor that exceeds the necessary measure and merely serves to extend power. (Ibid, p.198)

Also, do not look for a unifying logical theme through works of Sloterdijk. His writing style is too much metaphorical, world-historical, and hyperbolisch to accommodate for a unified theme of ideas. He compensates for such lack with strongly-worded spatial metaphorical language: In Du mußt dein Leben ändern3 he uses verticality of line as the spatial metaphor for self-elevation and reaching to the heights of “the Mount improbable”, or to borrow from Nietzsche’s Thus Spoke Zarathustra

Man is a rope, stretched between beast and Übermensch.

In the first volume of his celebrated magnum opus Sphären trilogy, Globen, he uses topology of globes and spheres as the running spatial metaphor for immunity and nurturing. His philosophico-morphological theory is based on an understanding of the history of culture as spatialisations of forms. He blends form, order, and thinking into the mix of spheres and the result is the archaeology of the human attempt to dwell within spaces, from womb to globe. 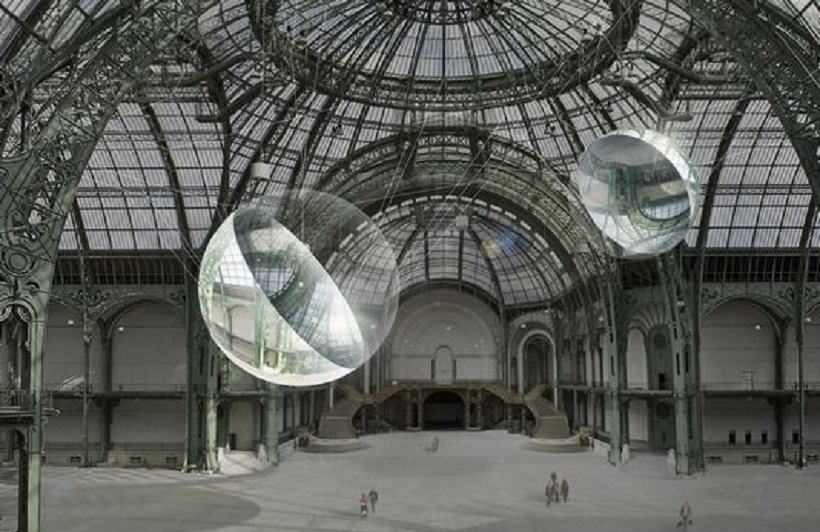 The other trend in his writings is a “playful thinking” of hermeneutic kind:

The expression “hermeneutic” derives from the Greek verb hermeneuein. That verb is related to the noun of hermeneus, which is referable to the name of the god Hermes by a playful thinking that is more compelling than the rigor of science. Hermes is the divine messenger. He brings the message of destiny; hermeneuein is that exposition which brings tidings because it can listen to a message. Such exposition becomes an interpretation of what has been said earlier by the poets who, according to Socrates in Plato’s Ion (534e), hermenes eisin ton theon - “are interpreters of the gods”. (p.29, Dialogue on Language, Martin Heidegger, 1953)

There is an abundance of reliance on classical etymology and their semantic evolution for clarification of concepts, as well as a palpable lack of sympathy for metaphysics.

I am on the opinion that it is necessary to engage actively with Sloterdijk’s thoughts and ideas. He presents the kind of philosophy at which the late Heidegger was hinting. A philosophy so imbued with forms, art, and life that it is no longer an imprisoning language of abstract concepts but has as its main characteristic a psycho-somatic approach to life. It tortures language to makes us move: either out of joy or of cringe and disgust. It welcomes technology (as opposed to Heidegger) in a broad sense which includes programming of consciousness to better our lives; Sloterdijk uses the terms anthropotechnics. It demands us to think anew about what it means to be human in the age of data and digital mass media and mass-consciousness.

However, one should always be careful when reading Sloterdijk’s aphorisms, declarations, and commandments. More importantly, it is crucial to not be intimidated by his unparalleled erudition, his command of literature, and knowledge of history. My suggestion is to actually take his references even more seriously than he does. Be mindful that in the midst of colourful wording and verbiage he is actually quite selective in choice of supporting cases and arguments for his positions. Just to take an example, the Bauhaus movement is entirely absent in the book Du mußt dein Leben ändern even though it shares the same bold themes of the book: kynicism and anthropotechnics. If he can find as much as a chapter worth of insights in L. Ron Hubbard’s movement, despite the sheer idiocy of the theology behind Scientology, then one may be prompted to ask why not deal with a much more impactful expressionist movement like Bauhaus? The poet of Weltende, Jakob van Hoddis, might have seemed to be an ideal figure to be a protagonist in Sloterdijk’s Critique of Cynical Reason: his irony and black humor in wrestling with the grotesque and catastrophe, but not yielding to them, surely qualifies him as a 20th century Diogenes.

You May Also Enjoy

The Forbidden Naiad of Wagner’s Music

For one human being to love another; that is perhaps the most difficult of all our tasks, the ultimate, the last test and proof, the work for which all other work is but preparation. I hold this to be the highest task for a bond between two people: that each protects the solitude of the other.

Mathematics and the mind

A review of cognitive accounts of mathematics